One cat-owning couple was surprised to find that their brand new Vitamix blender was their pets' latest fixation.

Jessica and Nikii Gerson-Neeves purchased the blender on Dec. 16 and now, over three weeks later, have yet to use the appliance. Their three cats continue to take turns sitting on the blender box, making it impossible for Jessica, 40, and Nikii, 38, even to open the Vitamix, they told The Washington Post.

It all began when Jessica placed the blender on the floor for a moment after the package arrived. Max, the couple's four-year-old cat, hopped on top of the box. Soon, the other two cats — George: Destroyer of Worlds and Lando Calrissian — were inspired to do the same, she told the Post.

Since then, one of the three pets has been on the box at all times, with the others often staying close to guard the package. In a Jan. 2 Facebook post, Jessica explained why she and Nikii haven't simply removed the cats from the box themselves.

"With three cats and only two humans in the household, the humans are outnumbered and (being giant suckers), both frightened of and unwilling to forcibly relocate the offending cats," she wrote. "Yes, we realize we're absolute madwomen, and yes, we are both ashamed and sorry."

Jessica told USA Today she thinks the cats are infatuated with the box because "it makes them feel … like the king of the hill."

To help solve their predicament, Jessica requested three empty boxes from Vitamix in her Facebook post, which was an open letter addressed to the blender company. She wrote, "Is there—I cannot believe I am honestly asking this — any possibility at all that y'all would be willing to send us three (the number is very important, as there are three cats and we need there to be one extra so we can hopefully get the actual blender out of the box) empty Vitamix boxes?"

Jessica explained, "Other cardboard boxes seem to lack the appeal of the Vitamix box, and since, much like your wonderful blenders, this stand-off seems to be Built To Last, we're afraid that this may be our only way out of the situation in which we find ourselves."

She told USA Today that she and Nickii have since received the additional boxes from Vitamix. They plan to fill the boxes with miscellaneous items with the hope that their cats will abandon the box with the Vitamix inside for the decoys.

"We have to outsmart the cats. It's a battle of wills now," Nikii added to the outlet. 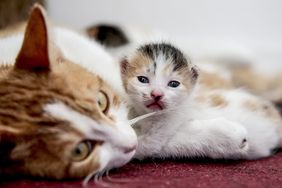