Hold onto your hearts and just try to control your squees: The video you are about to watch will make even the most bah humbug-iest person’s biological clock start to tick … or purr with delight.

When professional photographers Erin and Theresa Rouse of Hello Little, a Milwaukee-area photography studio, planned a newborn shoot for their cousin’s baby, they did not plan on their work going viral. To date, the video — which features baby Lainey and baby kitty “Eleven” swaddled together — has over 2.9M views, 52.1K shares and 27K likes in just two weeks.

And how did this sweet and serendipitous moment get caught on camera for the Facebook masses to swoon over?

“It was a complete fluke,” Erin tells OnMilwaukee.com. “We were in Texas and my cousin had given birth to gorgeous baby Lainey three weeks prior so we decided to do a newborn session in Erin’s parent’s dining room.”

The Wauwatosa-based photographer couple say they were traveling and, thus, unprepared for a video and photo shoot. So, they used what they had — smart phones and natural light — plus two of the cutest human and animal subjects ever.

Adding to the element of chance was the fact that Erin’s mom had found the tiny feline abandoned by the side of the road just a day prior to the video/photo shoot. She took the baby cat home to care for and bottle-feed. Meanwhile, as Erin and Theresa pressed their luck trying to get some decent shots of Lainey (who was just not having it at the time), they ultimately decided to give the baby a break and switched in the kitten.

“One thing led to another and we posed the kitten with baby Lainey and took a couple of quick videos,” says Theresa. “We never expected anything to come of the videos — we’re not exactly social media mavens so the fact that this has grown this much continues to shock us every day.”

Despite the success of this shoot, the women warn against non-professionals attempting photo shoots with babies and animals together.

“It’s important to note that this kitten was brand new – just a few weeks old – and was very milk drunk and sedate at the time of this session,” says Erin. “We would never recommend that anyone should pose a newborn with a kitten unless you really know animals and newborn photography. It’s such a highly specialized area of photography, and it is so important that these little humans are handled with great care and experienced hands.”

Since the shoot, cat mamas Erin and Theresa report that Eleven (so-named because he’s their 11th pet together) has doubled in size, energy and personality. 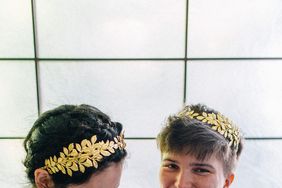 Couple Has a Kitten Hour Instead of a Cocktail Hour at Their Wedding — and It's Purrfect!