Paquin and her pup see eye-to-eye in Venice, Calif. Plus: Charlize Theron's day at the beach and more

True Blood star Anna Paquin gets down to her pooch’s level after grabbing ice cream with fiancé Stephen Moyer in Venice, Calif., on Wednesday.

Think they ran into Matthew McConaughey? Charlize Theron and boyfriend Stuart Townsend get their feet wet as they walk their dogs along the beaches of Malibu, Calif., on Saturday.

Anna Kournikova and Enrique Iglesias let their pooch feel the wind between his ears as they cruise near Miami on Monday.

Cradling one of her seven pups in her arms, singer LeAnn Rimes leaves the Wilshire Animal Clinic in Santa Monica, Calif., on Wednesday. Hope her little guy is okay!

Mwah! Twilight star Ashley Greene gets a little smooch from toy fox terrier Marlo after a visit to Menchie’s Frozen Yogurt in Los Angeles on Monday.

Another day, another beach visit for Matthew McConaughey and BJ! The duo enjoyed a run along the Malibu, Calif., shores on Sunday.

Embattled reality dad Jon Gosselin enjoys a moment of quiet on Sunday while walking one of his two German shepherds near his Wernersville, Pa., home.

She may be glammed up, but Mischa Barton isn’t above walking her dogs! The actress posed for a high-fashion photo shoot in N.Y.C. on Saturday, but not before spending some time with pups Ziggy and Charlie.

Hayden Panettiere cradles her adorable new pup during an errands run in Los Angeles on Friday. Last week, the Heroes actress brought the little guy to the set of her hit show. 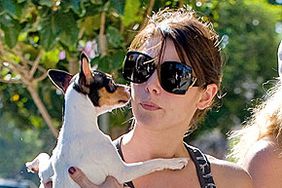 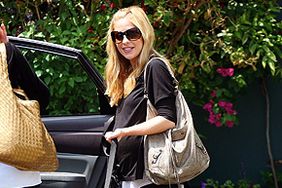