Looks like Californians aren't the only ones flocking to the beach to find some relief from the hot summer temperatures!

A family of black bears decided to have a beach day in Lake Tahoe, Calif. on Sunday, right alongside the humans.

Frightened beachgoers at Pope Beach stood by and watched as an adult black bear — presumed to be the mom — and three cubs splashed in the South Lake Tahoe waters.

A video captured by onlooker Jen Walkins showed the baby cubs playing in the waves as an adult cub wandered the crowded beach.

"We were all a little shocked," Watkins told KCRA.

She added that her son had seen the bear out before she was at the beach, and he said "it had gotten a little bit unfriendly/protective of the cubs with a golden retriever."

Watkins also told the outlet the adult black bear helped itself to some sandwich supplies from someone's cooler before disappearing back into the forest.

"They're unpredictable. They're dangerous….They can appear to be mild-mannered at times, but they can be very dangerous," Resendes said.

He added, "Don't feed them, don't entice them, don't provoke them and, obviously in a setting like this don't approach them. Respect their space."

Back in May, the California Department of Fish and Wildlife issued a warning regarding humans and bears in Lake Tahoe.

"Don't teach these young bears to be comfortable around people!" a press release stated.

The agency continued, "If they have gotten too close, make noise and try to scare them away so they don't feel comfortable and want to stay."

"While it's fun to see bears and even take pictures and videos, you're telling the bear that it's alright to be close to you. Bears are smart and acquire learned behaviors based on their experiences. If they have a negative, scary encounter with a human, chances are they will try to avoid them in the future," the CDFW explained. "Allowing bears to become comfortable around people can lead to unwanted activity including breaking into cars and houses or approaching people who are eating outdoors."

They also warned, "It is illegal to feed bears both directly and indirectly by allowing them access to garbage or food." 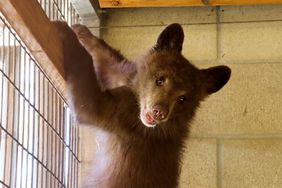 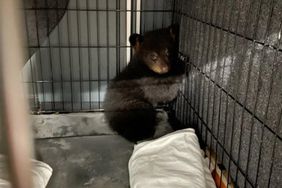 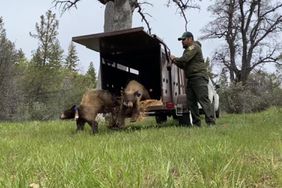