Adopt Me! Dorito Once Called the Streets Home

Home. Some pets never have one to call their own. We’d like to help change that by introducing you to an extraordinary adoptable dog or cat every week. Today, we’d like you to meet Dorito, a 6-year-old shepherd mix that previously lived on the streets.

This former stray was underweight when he arrived at Lindenwold, New Jersey’s Animal Adoption Center in January, after being plucked from a city shelter.

Even though street life is behind him, Dorito can’t shake his old memories – he’s mildly possessive over his food, a little hand-shy and is nervous around other dogs. But when he’s around someone he trusts, he’s a great companion.

“He’s a wonderful dog. He’s very affectionate, loves to cuddle,” says office manager Susan Russell, who has gotten to know and love Dorito over the past six months. “Sometimes he can feel a little uneasy. He just needs a little bit of time to warm up.”

When you first meet this medium-size dog, it’s best if you get down to his level and sit with him. “He wants to check you out first,” Russell says. “Then he’ll start to nuzzle and want you to pet him. Once he gets to know you he can be very trusting.”

The perfect owner for this pup would be someone who has had experience with other dogs. “Because he was found as a stray, he had to fight for his food,” says Russell. “You can work with him to make him feel secure.”

Young children and other dogs are not recommended as roommates right now. What Dorito needs most is a patient owner who’ll show him how carefree life can really be. If you’re interested in making Dorito your project, contact the Animal Adoption Center at (856)435-9116.

Adopt Me! Coco Just Wants to Cuddle and Play (In That Order)

Adopt Me! Dog Storm Is a Barrel of Fun 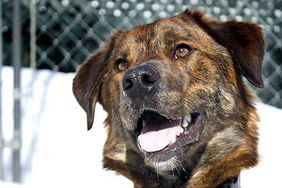 Adopt Me! Scout Is Ready to Explore with You

Adopt Me! Holmes Needs Help Coming Out of His Shell

Adopt Me! Abandoned by His Owners, Slim Is Ready to Trust Again

Adopt Me! Shasta Is a Glass Half Full Kind of Girl

Adopt Me! Frenchie Mix Mandy Wants You for Christmas

Adopt Me! Get Lots to Love with Funny Dog Roscoe

Adopt Me! Windee Is as Easygoing as They Come

Adopt Me! Once Abused, Pit-Bull Mix Brian Still Has Love in His Heart

Adopt Me! Little Pup Pezaru is Learning to Trust

Adopt Me! Handsome Hank Wants to Be Your Contender