Adopt Me! Affectionate Connor Loves to Give Hugs

Home. Some pets never have one to call their own. We’d like to help change that by introducing you to an extraordinary adoptable pet every week. Today, we’d like you to meet Connor, a young pup who was abandoned outside a shelter in south Los Angeles.

Four weeks ago, Connor was tied to a pole near the doors of Fur Baby Rescue. The German shepherd, who is about 2 years old, needed medical attention; his eye was so irritated he couldn’t see out of it.

“It was so covered in puss, I didn’t even know if he had an eyeball,” says volunteer Jennifer Baronoff. “He was so uncomfortable, he would try to itch at it and couldn’t even go for a walk.”

Veterinary staff at the shelter determined the cause of the issue: a foxtail weed was stuck in his eye. Luckily, they were able to remove it, and in the past few weeks, the loveable dog has recovered. Although he has only satisfactory vision in that eye now, it doesn’t stop him from living life to the fullest.

“He loves people. A lot of dogs, they just jump on you, but he’s so comfortable standing on his back legs and just hugging people,” she says. “It’s something I don’t want to, quote, ‘fix’ because it’s so endearing. When he’s not actually hugging, he prefers to stand tall like that. He just wants to stand.”

Clearly, the sweet pup, who weighs around 80 lbs., was raised to be comfortable around people. “We don’t know if the people who had him knew there was something wrong and didn’t want to deal with it,” she says. “He’s not the first dog to be tied to a pole outside.”

Though it’s been just a few weeks since he arrived, Baronoff hopes the plucky pooch can keep his optimism while he’s at the shelter because his upbeat attitude will definitely be his ticket to a forever home.

“Pretty much anyone would be a good owner for this dog,” Baronoff says, adding that he enjoys being around other canines. “The longer they stay in the shelter the more stressed they get. So the sooner we can get Connor adopted, the better.”

For more information on Connor, visit his Adopt-a-Pet.com profile page. To inquire about adopting him, email dawnvargas05@yahoo.com.

Adopt Me! Evander the Cat Wants to Give You a Hug

Adopt Me! Shy Don Juan Has Lots of Love to Give 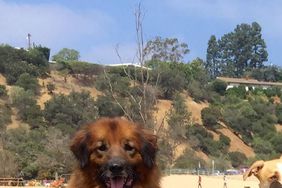 Adopt Me! Kismet and His Foster Buddies Will Give You #SquadGoals

Adopt Me! Chappie the Dog Is a Good Ol' Chap

Adopt Me! Dog Yancey Is Grateful for His Second Chance

Adopt Me! Rizzo Promises Never to Leave You

Adopt Me! Get Lots to Love with Funny Dog Roscoe

Adopt Me! Sweethearts Sammie & Sye Are So Happy Together

Adopt Me! Bennie Wants to Be Somebody's Buddy Again

Adopt Me! Windee Is as Easygoing as They Come

Adopt Me! Dusty Brings Hugs and Happiness Everywhere He Goes

Adopt Me! Hearing-Impaired Elsa Is Eager to Please