A Gossip Girl's Gotta Have a Dog!

From Blake Lively to Leighton Meester, these Upper East Side gals (and guys) can't live without their must-have accessory: a pooch!

Gossip Girl star might be the Queen B to New York City socialites, but Meester’s queen is none other than Trudie, her longhaired dachshund.

Spotted: Maltipoo Penny – a regular guest on the Gossip Girl set – getting some warmth on a blustery day in New York City.

It’s time for a good, old-fashioned heart-to-heart between Serena and Blair – or is it , and Penny?

A regular on set, Trudie shows Mom the way before call time.

Penny’s got a new pal! introduces her Maltipoo to husband dog, Baxter, while showing him the sights.

Coffee? Check. Banana? Check. Penny? Definitely check! has all her essentials in hand.

Kelly Rutherford doesn’t begin a day of shooting on the Gossip Girl set until she’s had two things: coffee, and a cuddle with her pooch.

takes a break from plotting against her frenemies to hang out with Trudie on the show’s N.Y.C. set.

Who’s the superstar, again? While does her best to ignore the cameras, Penny puts on her cutest face.

and Baxter lock eyes and share a thought: Wish Dad were here.

Rutherford does double duty as mom and dog walker as she strolls with her daughter, Helena, and her Australian cattle dog, Oliver, in New York.

complements his baby blues – suit, that is! – with his devilish doggy friend on set. 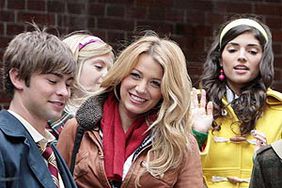 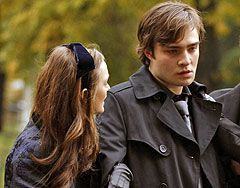 Binging Gossip Girl This Weekend? Let Me Tell You What It's Like to Actually Be 'on' GG 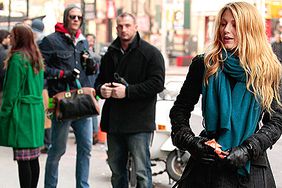 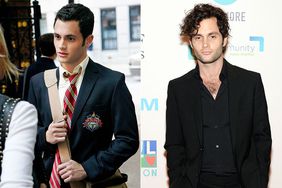 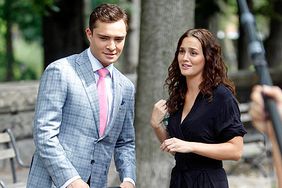