"The death of Mongolian Groom is a loss to the entire horse racing community," the Breeders' Cup officials said in a statement

Another horse has died at the Santa Anita horse racing track.

On Saturday, Mongolian Groom was euthanized after severely breaking his leg while running during the $6 million Classic of the Breeders’ Cup at the California track, according to several reports.

According to ESPN, Mongolian Groom was competing in the 1 1/4 mile contest when his jockey, Abel Cedillo, suddenly pulled-up the horse near the eighth pole — after which spectators could see the 4-year-old hobbling on just three legs.

A screen was quickly set-up to shield the horse from viewers while an equine ambulance drove up to take him to a hospital. Upon examination by four veterinarians, it was recommended that the horse be euthanized, given the severity of his injury. Cup officials described it as “a serious fracture” in his left hind leg.

“The death of Mongolian Groom is a loss to the entire horse racing community,” a statement from Breeders’ Cup Ltd. read, ESPN reported. “Our equine and human athletes’ safety is the Breeders’ Cup’s top priority.”

“We have worked closely with Santa Anita leading up to the World Championships to promote enhanced equine safety,” they added. “Santa Anita has implemented numerous industry-leading reforms to enhance the existing health and safety measures with the intent of providing a safe racing environment.”

Mongolian Groom is the 37th horse to die at Santa Anita since December 2018. These mounting deaths have pressured the track’s owner, The Stronach Group, to enforce new rules surrounding training and medication for the horses — including stricter pre-race exams.

“Everything had been going so great,” Bob Baffert, a horse trainer, said before Mongolian Groom’s death was announced. “You just don’t know when it is going to happen. We try to keep them as safe as we can.”

After the closing races on Sunday, Santa Anita will not be open again until its winter-spring meet on Dec. 26, according to the Associated Press.

The Stronach Group told the outlet it’s looking into replacing the main dirt track with a new, synthetic one during the down-time as a way to increase the safety of the horses and riders. The California Thoroughbred Trainers organization has also volunteered to raise money for an equine MRI for Santa Anita.

In addition to this, the political action committee, Animal Wellness Action, is pressuring Congress to pass a bill that will establish a national standard for medication in the industry: the Horseracing Integrity Act. The Breeders’ Cup, The Jockey Club and The Stronach Group have all expressed their support of the bill.

“American horseracing is at its greatest crossroads in history, and the death of Mongolian Groom underscores the need for Congress to pass the Horseracing Integrity Act. The Breeders’ Cup, and the Stronach Group that owns Santa Anita Park have been pushing to end doping, and end deaths by passing the bill, and we are grateful for their support as a partner in the Coalition for Horse Racing Integrity,” Marty Irby, executive director at Animal Wellness Action, said in a statement.

“But it is organizations like Churchill Downs and The Kentucky Derby that continue to hinder the legislation, and if they don’t step up in support of the bill then we’ll see more groups take up the issue and the debate will shift away from eliminating doping in horseracing to eliminating horseracing itself,” Irby added. 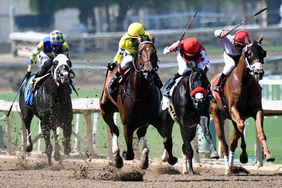 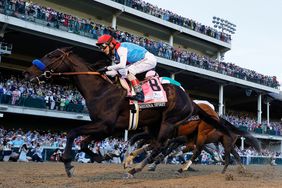 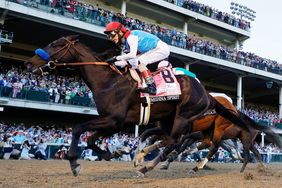 Go for Wand's Trainer, and Racing Fans Everywhere, Mourn the Tragic Death of the Sport's Most Talented Filly