Will Smith says daughter Willow has the acting bug, too

Watching her big brother Jaden, 9, act alongside her dad Will Smith in The Pursuit of Happyness seems to have made quite an impact on 7-year-old Willow Smith. The youngest child of Will and wife Jada Pinkett Smith got her wish and will also soon be making her big screen debut in Will’s upcoming film I Am Legend. After finding out that she’d landed the part, Willow jokingly taunted Jaden by sticking out her tongue, but Will insists that on-set she was all business — even when the temperature outside dipped below zero. Said Will,

Willow was out there and she has her stuff on and she’s cold and she’s getting a little irritable. And she looks at me and says, "Daddy, I don’t care how low it goes. I’m going to finish.’  I was like, ‘Wow, that’s good baby, because Daddy’s leaving if it goes any lower then that 1.’

The differences in acting philosophy between the kids is stark, according to Will.

Jaden is like Johnny Depp.  He just wants to do good work.  He loves acting, he just wants to make good movies.  And Willow is Paris Hilton.  Willow wants to be on TV.

That’s not to say that Willow doesn’t take when she does seriously, however. Added Will,

[Willow] has a drive.  She has an energy and she just connects to human emotion. I think a big part was probably [seeing] Jaden after The Pursuit of Happyness. She saw what Jaden did, and she was like, ‘I want that.’

Will also has a son, Trey, from a previous marriage. 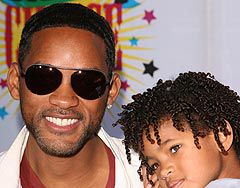 Will Smith: My Daughter Wants to Be Paris Hilton