Originally posted February 16th: Law & Order: Criminal Intent‘s Vincent D’Onofrio, 48, and his wife of 10 years, Carin Van Der Donk, welcomed a second boy on Thursday, February 14th. The couple has not yet decided on a name. They have a 8-year-old son together, Elias Gene, and Vincent has a 15-year-old daughter, Leila George, with his ex-wife, GretaScacchi.

The pregnancy was announced in October.

Thanks to CBB reader D. 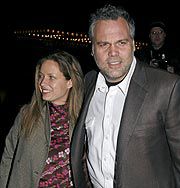