US soccer star starts foundation in honor of son

Eddie Lewis, a United States Soccer defender, visited Mnckebergstrasse, a boulevard of shops in downtown Hamburg, Germany, on Tuesday, June 13 with his wife, Mari, who is currently five months pregnant with the couple’s third child, and their children, older daughter Giselle and James, 17 months old.

Eddie and Marie recently started a foundation, The Big Game James Foundation, in honor of their son on May 17. James was born with Down Syndrome and a heart defect called atrioventricular septal defect. The heart defect caused James to have open heart surgery when he was five months old.
In regards to the surgery, Mari states that "babies usually take longer with recovery, from weeks to months. James took seven days. It was an incredible recovery." That possibly could have something to do with the pep talk that Eddie gave his son before his surgery. "OK, little buddy, you have a big game today. You have to be strong." James was strong for his big game, hence the name of the foundation.

The couple found out that James had Down syndrome while pregnant. They started to research and learn about the condition before James was born and were told many other parents that their son would change their lives in a million wonderful ways. "I was always a little hesitant to believe it because I thought they were saying that I’d be better at the expense of him, you know?" said Eddie. "Now I’m starting to realize that it’s not that at all. In fact, James, for some reason, and people with Down syndrome, whether it is their outlook on life or mannerisms, they just seem to bring the best out in people. When we’re walking in a grocery store or around at home, he just seems to bring a smile to everyone’s face. People seem to warm up in his presence." 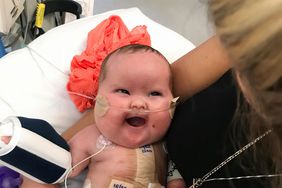