Update: Minnie confirmed her pregnancy on The Tonight Show with Jay Leno this evening. Although she did not discuss the baby’s father — saying, "I’m the public person and he can stay private" — she did answer in the affirmative when asked by Jay if she’d made too many trips to the buffet.

Are you calling me fat? You’ve noticed my tummy, haven’t you? Yes, I am [pregnant]. I love it more than anything else, but I am sick. I don’t know why they call it morning sickness. I am sick morning, noon and night, but it’s a fair trade-off.

You spend so much time in your car in Los Angeles … I had to get something, like a travel puke receptacle. It turned out to be a good thing to do, because I was on the 405 the other day in traffic, going about 45 mph. And I knew I was going to throw up, and I was like, "Oh Lord…" but I knew I had my handy Tupperware vomit receptacle. I’m a safe vomiter. You can totally keep one hand on the wheel, grab your Tupperware, and just [makes retching sound].

87.1% of you guessed correctly in our poll last week!

Click below for more from her Jay Leno interview — she discusses her cravings and aversions — to see photos from the appearance, and for the original rumor posts.

Minnie also discussed what she’s been snacking on — and what she can’t even say out loud because it’s that disgusting!

I like chip butties. In England, a chip is a french fry, and a buttie is anything that you butter — so you can have a bacon buttie, you can have a chip buttie … in a sandwich, where you basically butter a piece of bread, put your steak fries — they’re the best — in it, ketchup, and then close it, chomp, and throw up!

I can’t … E-G-G-S. Ugh. I can’t even look at them. I have to detour in the supermarket. They make me want to throw up. i just can’t even … the other thing is raisins. I used to love them.

It’s been so completely bizarre, it’s like ‘Invasion of the Body Snatchers.’ Women all know, it’s like you’re not in control anymore at all. I really love it though.

See more images of Minnie on The Tonight Show at The Daily Mail.

Update Feb 22nd: Page Six now reports that Minnie was spotted shopping at crewcuts for a baby girl, and "overheard talking about her pregnancy and how she hasn’t been feeling well."

Update Feb 17th: Page Sixlends further support to the rumor, reporting that its ‘spies’ recentlyspotted Minnie and a friend outside a Los Angeles-area doctors officelooking at sonogram pictures. Minnie then called her boyfriend,identified only as Matthew ‘in England,’ on the phone to talk about "getting bloodwork done." She then reportedly told her friend "Matthew says I should be quiet so no one hears me."

Originally posted Jan. 31:A Socialite’s Life is reporting this afternoon that actress Minnie Driver is pregnant with her first child, and that the 37-year-old is "keeping the identity of the father under wraps." No word from Minnie’s rep was given, however.

Thanks to CBB readers Jennifer and Tess. 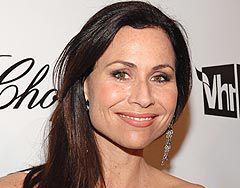 Update: Minnie Driver on name choices and her lack of an announcement