Update: Jason Lee to be a dad for the second time, expecting a daughter

Update: Jason shared on the Today show this morning that he and Ceren are expecting a daughter. She is due in August, not this fall as previously reported.

Update April 29th: Jason’s rep confirms. Ceren is due in the fall.

Originally posted April 28th: Is My Name is Earl’s star Jason Lee expecting a baby with girlfriend Ceren Alkac? According to those attending the San Francisco International Film Festival’s Midnight Awards over the weekend, he is. It is being reported that Ceren looked visibly pregnant and Jason was "sweetly attentive" to her.

If true, this will be the 38-year-old’s second child. He and ex-fiancée Beth Jean Riesgraf‘s son Pilot Inspektor is 4 ½.

Source: San Francisco Gate; Photo by A. Diaz for Wireimage.

Thanks to CBB reader A.

It's a Girl for My Name is Earl Star Jason Lee 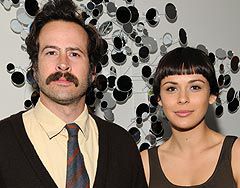