Tori Spelling Talks about Her Verbal – and Competitive – Kids

While the actress says she has a "perfect family," Liam and Stella still share some (loving) rivalries

There’s nothing like a little healthy competition between siblings – especially in Tori Spelling‘s house.

“Today she said ‘mama’ for the first time,” Spelling told reporters of daughter Stella, 7 months, at the opening of the Byron & Tracey Salon in Beverly Hills on Thursday. “It was like the biggest day. I was like, ‘Oh my god!’ Your heart just melts.”

Only, older brother Liam, 22 months, was not impressed.

“Liam’s all walking by just like, ‘Mama, mama. What’s the big deal? I can say that,’ ” Spelling says.

But seriously, Spelling, 35, says her older son is adjusting well to being a big brother, despite being “questionable at first.”

“He was a little weirded out that she was staying, and now he’s really good,” Spelling says, teasing, “he thought she was on loan like most of my clothes.”

“No, he’s really a good big brother,” she says. “At times he goes over and pets her head and plays with her. He makes her laugh and he is, like, her world. She lives and dies for him so he can do no wrong.”

Stella’s also a daddy’s girl, the actress says. “She already bats her eyes [at her dad],” Spelling says.

With her happy – and lovingly competitive – two children, does the actress want more kids?

“We do,” Spelling says. “I always say whatever we’re blessed enough to be able to have I’d be happy with. Right now I have the perfect family.”

RELATED GALLERY:
• Tori dishes on being pregnant with Stella

Dean McDermott Has a Daddy's Girl in Daughter Stella 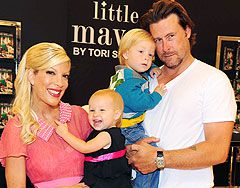