There will be no ‘strike baby’ for Desperate Housewives actress Eva Longoria Parker and her husband, professional basketball player Tony Parker, Tony tells a French newspaper. Several of her peers in the television industry announced their pregnancies during the layoff, but Eva — the subject of persistent pregnancy rumors — spent the downtime just enjoying being a newlywed. Children are in the picture for the couple, Tony says, but "not for the moment." He adds,

Eva and I talk about it but with our careers it isn’t the right moment.  Right now, we’re enjoying the young married life. Because of the writers’ strike, Eva has spent a lot of the last three months with me in San Antonio. When she’s working, we see each other less. 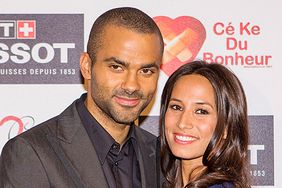