Taking advantage of the writers strike, which has halted production on her show 30 Rock, writer and actress Tina Fey says that all the extra time she’s been able to spend with her 2-year-old daughter Alice Zenobia has been "a blessing."

I have 1,000% more time with Alice.  I’m as tired as I was when I was working, because a 2-year-old will wear you out, but that’s the only blessing in this strike situation for me.

Alice is really into music at the moment; Tina says that her daughter’s tastes are particularly diverse.

She likes Mary Poppins.  She sings ‘Just a Spoonful of Sugar,’ that’s her tour de force. … We were trying to teach her some Amy Winehouse the other day – just the ‘No, no, no’ part.

Tina, 37, and her husband Jeff Richmond are definitely enjoying the pure, unfiltered comedy that often accompanies the ‘verbal boom’ of toddlerhood. Says Tina of Alice,

She’s hilarious.  She’s really starting to talk in full sentences, and she has her opinions and she’s a little bit learning how to lie.

Noting that her daughter’s memory is "topical," Tina adds,

Alice is the first child for Tina and Jeff.

Thanks to CBB reader Debbi and Pam. 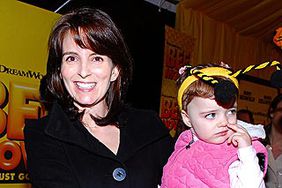 Tina Fey talks about having it all, and doing the impossible