Tiffani Thiessen and husband Brady Smith have a reason to celebrate!

Thiessen’s colleagues say motherhood is something the actress is more than prepared for. “She’s totally the den mother of the show,” White Collar costar Matt Bomer told PEOPLE in February. “She’s so organized and so loving and generous – that can only make her an absolutely amazing mom.”

Thiessen, 36, and Smith, an artist and actor, who have been married since 2005, have said that starting a family is “something we’ve wanted for a long time and we are thrilled that it’s actually happening.” 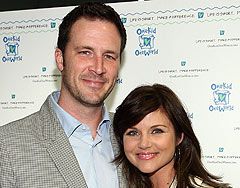 Tiffani Thiessen Is Expecting a Baby