While hanging out at the Los Angeles Zoo last April, Halle Berry gazes lovingly at her daughter, who turns 3 on March 16. "I thought I knew love before, but I've never felt anything like this," she told Essence in 2009. "I want to leave a legacy that she can be proud of."

While Berry and her ex, Gabriel Aubry, are in the middle of a custody battle,

the model dad continues making his baby girl, 2½, his No. 1 priority during an outing in Los Angeles on Feb. 17.

Life's a beach! Nahla keeps her actress mom "grounded" while building sand castles at a Malibu beach on Dec. 12, 2010. Motherhood has been been a "joy," Berry said recently, "I wouldn't say it's the hardest work I do, I would say it's the best work I do."

Months after their split, the former couple spends a day at Disneyland with their adorable daughter on June 14.

Who looks purr-fect? Her mom may have played Catwoman on the big screen, but Nahla, 2½ makes one adorable itty-bitty kitty at the Mr. Bones Pumpkin Patch in Beverly Hills on Oct. 21.

Talk about a love match! Berry only has eyes for daughter Nahla during a playdate at Griffith Park in L.A. on July 11.

Someone's following in their mother's footsteps! Berry and her mini-me stroll hand-in-hand on L.A.'s Redondo Beach on July 15.

Nahla enjoys a lift-off from both parents during an outing in London on Aug. 26. "While it was not a love connection for us, he was absolutely the right person to have this child with because she is going to have an amazing father," Berry has said of her ex.

Mwah! Nahla gets ready to plant one on Berry while kicking back at a Malibu beach on May 12. "I hope she's proud of me," the actress recently shared. "I hope she will appreciate that I dared to be myself and always did what I believed in. I hope those are qualities that I pass on to her." 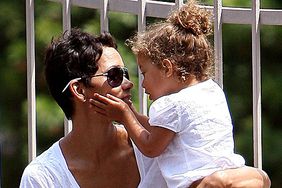