The soon-to-be mother of three seems to be popping up everywhere! The supermodel offers the following snippets about family life in the July 24th editions of Us and People magazines:

From Us, on a few of her family’s favorite things:

"We like to sit at home [in L.A.] and eat brunch at the Four Seasons hotel." As for her two kids, Leni, 2, and Henry, 10 months, "Leni is really into our new Havanese puppy. Henry isn’t quite there yet."

From an interview with People magazine’s K. C. Baker, in which she discusses pregnancy and her kids’ personalities:

Is pregnancy easier the third time around?
"It was always easy for me. I’m lucky. A friend said, ‘You just got back into shape, and here you go again.’ I don’t think about that at all. The child is more important than my figure."

What are you doing to stay in shape?
"Not much. I’m busy running after the kids. We try to take them everywhere we go. On the plane it’s [especially] hard. People sometimes have no mercy."

What are Leni and Henry like?
"Henry is huge. He’s a really nice little boy. Leni loves to dance and put on a show. She speaks in German and English, which I’m proud of. She’ll say things in German, and Seal (her husband) will say, ‘What does that mean?’ He understands a lot, but she’s catching up." 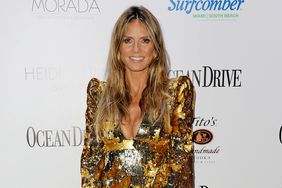