We are so happy.

The new baby joins brothers Griffin, 5, from Teri’s previous marriage, and Carter, 9, from Jamie’s previous relationship. The pregnancy was announced in October. 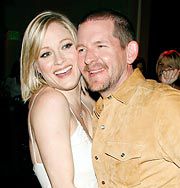