Update: It is being reported that Yulia went to sleep the night before at 2 a.m. and was awakened two hours later by labor pains.

Yulia’s boyfriend never left her side and their website reports,

He didn’t leave her for a second and cut the cord off himself. The boy looks a lot like Daddy –- as it should be. Yulia and Parviz [kept] the baby’s name a secret.

The new baby joins Yulia’s daughter Viktoria, 3, from a previous relationship. The pregnancy had been announced in June, with Yulia showing off her belly during a concert in August. 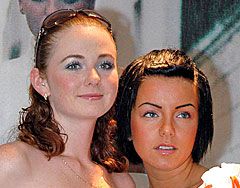