A producer who wishes to make an animated film about the world-famous polar bear Knut says he’s offered the Berlin Zoo $5 million for the rights to the animal’s story — and he has some definite ideas about who he’d like to see involved with the movie. Suri Cruise, the 20-month-old daughter of actors Tom Cruise and Katie Holmes, visited 1-year-old Knut while in Berlin last year. Says Ash R. Shah, owner of The Animation Picture Company,

I see the heartwarming relationship between Knut and his caretaker, Thomas Doerflein at the center of the movie … Suri [Cruise] could speak the English voice of Knut.

Despite the offer, Ash says he’s heard nothing from Tom and Katie’s reps. 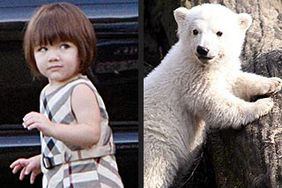 Knut: Coming to Theaters and Voiced by Suri Cruise?