From Italy to Germany to Washington, D.C., follow little Suri Cruise –and her parents! – on their globetrotting adventures. By Brian Orloff

Tom Cruise, Katie Holmes and their then-11-month-old daughter Suri (looking sharp in tartan) got into the spirit of St. Patrick's Day as they stepped out to catch son Connor's basketball game in Beverly Hills in March.

Suri joined her parents for an all-star birthday bash in Los Angeles in April. The Cruises, along with Will Ferrell and his family, attended a party for Brooke Shields's daughter Grier Henchy, who shares a birthday – April 18 – with the littlest Cruise.

Cruise entertained the then-13-month-old in Shreveport, La., where mom Holmes was working on her new movie Mad Money. Suri wasn't the only sweet surprise on set: Holmes had been treating the cast and crew to cupcakes, pizza and ice cream.

In June, Suri jetted to the French Riviera with her parents. The tyke waved at onlookers as she and dad Cruise left the Eden Roc Hotel in Cap d'Antibes.

She's not ready to take the plunge yet – but Suri, then 15 months, still enjoyed the surf thanks to mom Holmes's support. The mother-daughter pair soaked up the sun during a party at Saint-Jean Cap Ferrat, France, in July.

Suri – who landed in Berlin in July – got a pick-me-up from proud mom Holmes. The mother-daughter pair later met up with Dad, who was in Germany filming the WWII drama Valkyrie.

Life's just a walk in the park – literally! – for Suri and Holmes as the two enjoyed the shade of Berlin's Tiergarten park in July.

With the promise of a treat, Suri couldn't help but smile as she tagged along with Holmes and Cruise on a visit to renowned Berlin chocolate shop Fassbender amp Rausch in August.

After hanging out with Dad on-set, a Burberry-clad Suri prepared for a fashionable lift-off on a sports field near the Sanssouci palace in Potsdam, Germany.

Suri made the acquaintance of a local – a four-legged friend! – while strolling with Mom through the Gendarmenmarkt, an outdoor square in the center of the German capital.

It's tiring being one well-traveled baby! Exhausted from her adventures in Germany, Suri snuggled for a nap in mom's arms in Berlin.

With dad Cruise busy on the set, Holmes and Suri, 16 months, escaped for a day trip to Paris in mid-August, and the mother-daughter duo had their sights set on one thing – shopping! The pair checked out the sights, strolling down Rue St. Honoré.

Striking out on her own, Suri showed off her purchases after a visit to Baby Tuileries, a favorite infantwear boutique. Holmes had previously picked up goodies for her daughter there, stopping in October 2006.

Time to refuel! Suri and Holmes stopped for a snack (earlier, she tore into a croissant at L'Avenue restaurant) to keep the 16-month-old going throughout the day. In addition to shopping, Holmes and her daughter took a private tour of the Louvre together.

Suri engaged in a favorite pastime – chasing pigeons – while

strolling with mom. Earlier at the Louvre, the youngest Cruise seemed more

interested in the courtyard birds than the art. According to an

eyewitness, "Suri was napping when Katie got to the Mona Lisa."

All that shopping – and those wardrobe changes! – can be

exhausting. Suri snuggled up to her mother as the two left the Hotel George

V before heading out for one last taste of Paris: a visit to the Marais.

There, the pair dropped by a flower shop and another clothing boutique.

flight clothes on, Suri and Holmes prepared to board their private jet

After jetting to New York City for two days in October, the Cruises left their hotel, reportedly en route to London. Earlier that day, Holmes took Suri along as she continued a photo shoot for her movie, Mad Money at Chelsea Piers.

Talk about a present at the finish line! Suri and dad Cruise greeted Holmes after she ran the New York City marathon in mid-November.

In Washington D.C. in November, where dad was promoting his movie Lions for Lambs, Suri got scooped up during a walk – or is that a ride? – around Georgetown with Mom. Where will this jet-setting baby head next? Stay tuned .... 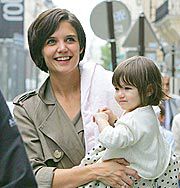