Spanish actress Paz Vega, who you know as the housekeeper/nanny in Spanglish is expecting her first child, a boy, with her husband, shoe store and restaurant owner Orson Salazar. Hola! reports that the baby will also be named Orson.

She told People magazine that she is four months along and that it’s now visible. She said, "We are very excited. I haven’t had time yet to decorate the nursery, because I’ve been working. But after Christmas I’m going to prepare everything."

The couple lives in Los Angeles but she may go back to her native Spain to give birth. Paz said, "I haven’t decided yet where I’m having him. I guess after I’m done working here – I don’t know exactly but I’m hoping in Spain."

Her career is really taking off. Currently starring in the comedy 10 Items or Less, with Morgan Freeman, she will also appear in the thriller Fade to Black with another Hollywood legend, Christopher Walken. She plans to return to work soon after giving birth. She told People, "I’m going to rest for three months or so, but I have to be ready so I can start working again."

Thanks to CBB Readers Heather and Mary Beth. 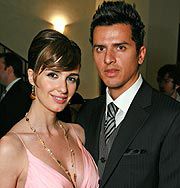 Motherhood is a 'Fortunate' Experience for Paz Vega

Paz Vega on her pregnancy