Sonequa Martin-Green is going to be a mom again!

The Star Trek: Discovery actress, 34, and her husband, fellow The Walking Dead star Kenric Green, are expecting their second child together, a baby girl, they shared on Instagram Sunday.

In the adorable announcement photo, both Green, 37, and the couple’s 5-year-old son Kenric Justin II have their hands placed on Martin-Green’s baby bump, visible underneath a red T-shirt. All three family members are beaming at the camera with wide smiles.

“Adding another passenger to the Green train!” the second-time mother-to-be captioned her post, which was re-shared by her husband. “All aboard little lady, this train is fueled by Love and we’re already overflowing with it for you. 💚”

Martin-Green added a bevy of hashtags to the end of her caption, including, “#ThankYouJesus,” “#babygirl,” “#babysister,” “#excitedbigbrother,” “#proudmommyanddaddy” and “#happyfamily.”

Martin-Green made waves as Sasha in earlier seasons of The Walking Dead, before her character died in the season 7 finale of a self-inflicted poison capsule, taken in an effort to help her friends against Jeffrey Dean Morgan‘s Negan. She currently stars on Star Trek: Discovery in the lead role of Michael Burnham.

Green stars in a recurring role as Scott on The Walking Dead, and has been in series like The Originals and Hawaii Five-0. He also appeared as Mike Burnham in a season 2 episode of Star Trek: Discovery titled “Perpetual Infinity.”

The two tied the knot in 2010, and confirmed the birth of their son exclusively to PEOPLE in January 2015.

“We thank God for this incredible blessing,” the then-new parents told PEOPLE of Kenric Jr. “We are overjoyed. He’s the coolest little man ever.”

In the November 2015 issue of Good Housekeeping, Martin-Green admitted of new parenthood, “I just melt when you mention the fact that I’m a mother now.”

She added that parenting has been both “profound” and “enlightening,” as well as strengthened her relationship with her husband.

“It’s really been divine having someone come from you and being responsible for their livelihood, for nurturing them,” said the star. “My heart just melts as I speak about it and frankly I think words can’t really describe it when I try. It’s almost going to make me cry.” 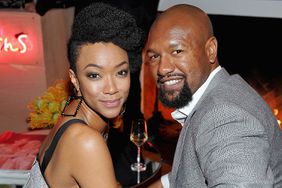