Television veteran Shon Gables made her debut on The View yesterday morning as a guest host, flanked by the other mamas of the show and dressed in elegant maternity fashions by Isabella Oliver of London. Shon’s look included a super luxurious Ivory Wrap Cardigan which retails for $145. The cardigan is great both open and loose and wrapped snugly, and like all Isabella Oliver clothes, they are totally wearable and chic for that infamous fourth trimester.

New York-based Forty Weeks worked with Shon and her style team to put together an understated yet flawless look. Forty Weeks founder, Julia Beck, was pleased with the final result. "Shon is beautiful on every level and is a treat to work with – she captures the essence of pregnancy and is exactly why America has fallen in love with their pregnant celebrities."

Other members of the celebrity bump brigade who have fallen for the chic looks of Isabella Oliver include: Marcia Cross, Jen Meyer, Bryce Dallas Howard and Dayna Devon.

Based in London, Isabella Oliver designer maternity wear has beautiful, easy to wear clothing for pregnant women who won’t compromise their sense of style. With five pregnancies between them, company creators Vanessa Knox-Brien and Baukjen de Swaan Arons only sell clothes they have designed, created, worn and fallen in love with. 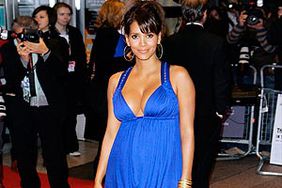