Shakira talks about marriage and children

Colombian singer Shakira, 31, opened up to a Uruguay newspaper about her future as a wife and mother. The Hips Don’t Lie singer denied rumors that she was soon to be married to her long-time fiancé Antonio De La Rua in Uruguay. Shakira explained that she is currently visiting her farm estate in Maldonado province for a month while she works on her next album. She did go on to elaborate on some of her possible plans for the future saying:

I fantasize about many things. About having kids, about living a happy life at Antonio’s side for many years, above and beyond what a ceremony represents.

Shakira explained that she views marriage more realistically now that she is a little bit older.

When somebody is 15, she dreams of putting on a white dress and walking to the altar. When you’re 31, you see different things.

Antonio is the son of former Argentine president Fernando De La Rua. He and Shakira have been dating since 2000. Antonio is expected to join Shakira on her farm in Uruguay this week. 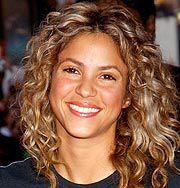