She adds, "The love is just unbelievable. It's very overwhelming."

“It’s wonderful. It’s very, very magical — and exhausting,” the actress says of motherhood while being interviewed by Barbara Walters for her annual special, The 10 Most Fascinating People of 2014, airing Sunday on ABC at 9:00 p.m.

She adds, “The love is just unbelievable. It’s very overwhelming.”

Johansson, 30, who welcomed Rose Dorothy in September, one month before she wed Romain Dauriac, isn’t holding back when it comes to the day to day with her daughter.

The first-time mama admits she’s happy to take on the more tedious tasks of a newborn: diaper duty and late-night feeds.

But breastfeeding isn’t just about bonding with her baby girl. “It’s the best way to get back in shape,” Johansson shares.

The actress will hit the big screen next in The Avengers: Age of Ultron, which hits theaters May 2015.

For more from Walters on this year’s The 10 Most Fascinating People of 2014, pick up this week’s issue of PEOPLE, on newsstands Friday.

Scarlett Johansson: I Don't Like My Thighs (Says One of Barbara Walters's Most Fascinating People of 2014) 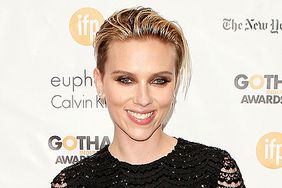 Scarlett Johansson Calls Motherhood 'Exhausting in the Most Wonderful Way'