Sandra Bullock is opening up about how she talks to her two children about race.

The actress, 57, appears on Wednesday's episode of Red Table Talk alongside Willow Smith, Jada Pinkett Smith and her mother, Adrienne Banfield-Norris, where she discusses how she approaches conversations about society and race with her children Louis, 11, and Laila, 8, both of whom she welcomed via adoption.

"As a white parent who loves her children more than life itself, I'm scared of everything," she admits. "I know I'm laying all kinds of existential anxiety on them. I have to think about what they're gonna experience leaving the home. They're gonna have my fear. But how can I make sure that my anxiety is accurate, protective."

"With Lou being a young Black man, at one point, sweet, funny Lou is gonna be a young man. And the minute he leaves my home, I can't follow him everywhere, though I will try," she continues. "I will try, and I'm joking, but I'm not. I don't know what I will do, but I pray and pray and pray that I have done a good enough job, scared them sufficiently."

Bullock says that she's been "schooling" her son since he was 6 years old. "He popped that hoodie on his head, and I went, 'Ah ugh,' " she recalls. "And I said, 'Let me just explain.' "

The star says her daughter recently saw Bullock's partner Bryan Randall watching Netflix's Squid Game and "walked out of the room and she was depressed."

"I was like, 'What happened?' She said, 'I don't want Dad to watch that.' 'I'm not watching it. It's violent. Of course you shouldn't be.' She goes, 'No, because there's no Black people in it,' " Bullock recalls. "The fact that there was fire in her belly made me so happy that she was already voicing."

"And I had to let them teach me and tell me what they need to know," she adds. "I thought I was educated and woke. I thought I had it all, and guess what? I wasn't." 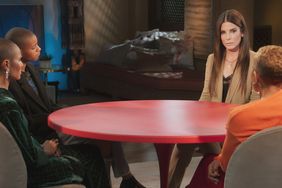