"I had promised and legally agreed to protect her," the star tells PEOPLE exclusively

Oscar winner Sandra Bullock opens up for the first time about fostering and adopting her 3½-year-old daughter, Laila. Subscribe now for instant access to the exclusive interview, plus the adorable family photos of Laila and brother Louis, or pick up PEOPLE on newsstands Friday!

When Sandra Bullock embarked on the process of adopting her daughter, 3½-year-old Laila, she had a key concern: protecting the little girl’s privacy.

“You feel it’s very much like witness protection,” the star, 51, tells PEOPLE exclusively in this week’s cover story.

Bullock, who fostered Laila (pronounced Lila) before adopting her, feared that the process would be jeopardized by the intense spotlight of her stardom — a fear that proved especially scary during an emergency room visit before the adoption was complete.

“Unbeknownst to me, a photographer had followed us and taken a photo of us in line,” says the actress, who adopted 5-year-old son Louis in 2010.

“The next day, I learned that a photo of her was being shopped around for sale to every outlet around the world. I had promised and legally agreed to protect her from something like this, and here I was chasing down lawyers — having them begging them to keep her safe.”

For the Oscar winner, the incident — and the threat of exposure — also highlights the need to create the safest, most secure home environment possible.

“Most foster children are in foster care because they were taken from their birth homes under tragic circumstances — and the last thing I wanted was to bring more harm to her because of the nature of my job,” she says.

To learn more about adoption and fostering in the U.S., go to adoptuskids.org and kids-alliance.org.

Louis Bullock Was Ready for His Sister Laila 'Before She Even Arrived,' Says Mom Sandra 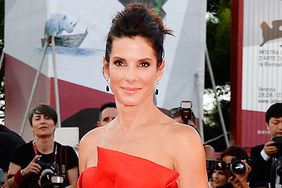