The baby girl, born Friday, is the first child for both actors

Ryan Gosling and Eva Mendes welcomed a daughter on Friday, Sept. 12, PEOPLE confirms. She is the first child for both actors.

“She’s absolutely in heaven being a mom. She’s never been happier,” a friend tells PEOPLE of Mendes, who delivered via c-section.

“She and Ryan are just in awe of this beautiful person they created. It’s a really special time for them.”

PEOPLE confirmed the pregnancy in July, but the couple kept Mendes’s growing baby bump under wraps for months.

“Their lives completely changed as soon as Eva got pregnant. They used to travel all over the place together and go on hikes with their dogs. [But in the past few months] she barely left the house,” a source previously told PEOPLE. “Ryan has been taking care of her, picking up food and running errands. He has been very supportive of keeping things a secret.”

Though they hid the happy news, an insider told PEOPLE the stars couldn’t be more thrilled to expand their family.

“This has been a long time coming,” the pal said of the very private parents-to-be. “Ryan and Eva definitely discussed children before. She knows how much he wants to be a dad and he’s going to be an amazing father.” 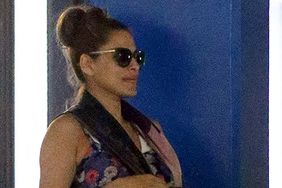