Update: A source tells us, "As someone who knows and works with Marcia Cross, I assure you that ridiculous National Enquirer story is complete b.s.!!! She and her babies are completely fine."

Originally posted 3:45 pm: The National Enquirer is reporting that Desperate Housewives star Marcia Cross is suffering from placenta previa, a condition where the implantation of the placenta at least partially covering the cervix. It was discovered during a recent ultrasound after Marcia had been experiencing cramps and bleeding.

According to the Enquirer’s source, "Marcia’s doctor checked the fetuses’ heartbeats, and found them to be perfectly healthy. Marcia was relieved, but her doctor warned her that she had better slow down and take things easy. The problem might resolve itself as the fetuses grow and pull the placenta away from the danger area — but if it doesn’t work itself out, it could endanger both her and the twins."

About.com’s Pregnancy Guide Robin Elise Weiss tells us, "Placenta previa is where the placenta can lay completely or partially over the cervix. This can cause some episodes of bleeding. Many times placenta previa discovered prior to 20 weeks will go away on it’s own as the body of the uterus continues to grow. If it is still present at the end of pregnancy a cesarean birth will prevent risk to the mother and baby or babies in the case of Marcia Cross. Since she is pregnant with twins, she is at a greater risk of preterm labor, meaning her cervix may begin to open earlier, which would pose a risk of bleeding for her. Many physicians would prescribe bedrest in this case." For more on placenta previa, visit About.com.

Marcia’s fraternal twins are due in April. 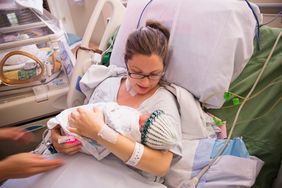