Britney originally said the items were for herself.  None of the items could have been mistaken for being purchased for the two kids Britney already has.

However, Jamie Lynn, 16, has been in Louisiana ever since she announced the pregnancy in December, so we’re marking this one as untrue.

Thanks to CBB readers Lisa, Shaine, and Betty.

Rumor: Kevin Federline reportedly gets custody of the kids, 4 days a week

Rumor: Britney to have boys baptized 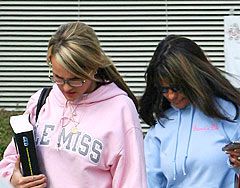