Update: Both Fergie’s rep and her mother have denied the rumor to People. Her mom Terri says,

I think people can’t believe that people get married because they love each other and not because they’re pregnant. [She won’t be pregnant] soon. I’d say a couple years. They’re newly engaged. Let them have a while to plan the wedding!

Originally posted 9 am: Rumors were swirling at Clive Davis’ pre-Grammy party that singer Fergie, whose real name is Stacy Ferguson, 32, and her fiance, actor Josh Duhamel, 35, are expecting their first child. One source revealed,

She picked up a wedding dress while she was in New York for Fashion Week and wants to move the wedding up so she is married before the bump becomes too obvious. At Clive’s, she just drank water.

The rumor initially began in mid-January.

Thanks to CBB reader Lisa. 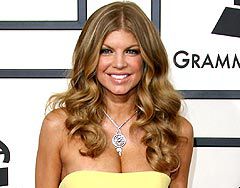