They survived two seasons apiece on both CBS’s Survivor and The Amazing Race and even their own FOX reality show, Rob and Amber: Against the Odds. Now Rob and Amber Brkich Mariano are taking on their most daunting challenge yet — parenthood.

With a first name of Italian origin meaning “light of God” and a middle name as a tribute to her paternal grandmother, who died on the Fourth of July, Lucia arrived weighing 6 lbs., 11.5 oz. and measuring 19 ¼ inches long. “Both mom and baby are healthy and doing great,” says Rob.

“Lucia is a great eater and sleeps a lot, however she tends to be a bit of a night owl like her daddy at times,” he adds. “She is a perfect baby and we could not have asked for anything more. We are over the moon with happiness at her arrival!”

Amber Brkich competed on Survivor: The Australian Outback, which aired in 2001. Rob Mariano was first seen on Survivor: Marquesas in 2002. Both formed a winning alliance on Survivor: All-Stars, which concluded with Rob’s on-air proposal to Amber during the May 9, 2004 finale. After competing on the seventh season of The Amazing Race as an engaged couple, the two wed on April 16, 2005. In 2007, they took on The Amazing Race again during its All-Star season.

In 2005, Amber told PEOPLE: “We both come from a family of three kids, so I would like to have three kids, but you never know what happens, so hopefully we are blessed with at least one child and then we would both like to adopt one day if possible.”

Two years later, she spoke to PEOPLE about their plans for a family. “We definitely want a family and we’ve been talking about it,” Amber said. “But I think it was also important for us to spend the first couple of years just the two of us together.” Rob added, “We are not trying right away but when it happens, it happens.” 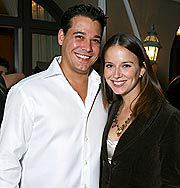