"If you're happy & you know it!" Rachel Robinson captioned a snap of herself, wife Natalie, daughter Ari, 6 months, and twin sons Jesse and Jack, 20 months

Rachel Robinson has got mom life down!

The former star of MTV’s Road Rules and The Challenge, 36, is swinging into Saturday with her wife Natalie Gee and their three adorable kids: daughter Ari, 6 months, and twin sons Jesse and Jack, 20 months.

“Ready for the weekend!!! If you’re happy & you know it!” Robinson wrote on Friday alongside the cute snap, which sees her holding one of the grinning twins upside down in one arm and the other in her opposite arm.

Like her brothers, Ari was not looking at the camera as she was held by Gee. Instead of being distracted by her positioning, though, the wide-eye youngster was clearly more interested in something off camera.

In the caption of a similar family photo — where the spouses and their sons all sport rainbow-print T-shirts by AKID — Robinson wrote, “June got us feeling #Proud,” adding hashtags like “#twomoms,” “#loveislove,” “#happypride” and “#loveourcommunity.”

Molly Sims on Raising Three Kids Under 5: “It’s Harder Than I Thought It Was Going to Be”

Gee — co-founder of Gee Beauty, whom Robinson married in October 2017, eight days after their sons were born — shared her wife’s first photograph on Sunday along with a more serious, touching caption that explained the couple were celebrating a big relationship milestone that day.

“On this day five years ago, I took @rachel_fitness class at @barrysbootcamp and she asked me to go for lunch a little later that day,” she wrote. “I was so apprehensive, I said to my sister @celenegeebeauty, I’m so nervous, I’m going to go with Rachel (who I knew I liked), and then, (I was not open about my sexuality) would be so exposed. Celene said to me, without hesitation, ‘I have a great feeling about Rachel, go.’ ”

“SO, here’s to five years, 3 kids later, I am so proud to be who I am, and so proud of the family we are raising, with the most loving family around,” Gee added, writing in conclusion, “Happy Pride Everyone ❤️🧡💛💚💙💜 Thank you @akidbrand for the merch, wearing it proudly.”

Gee and Robinson announced the birth of their daughter in December — 14 months after the Barry’s Bootcamp master instructor gave birth to Jesse and Jack, on Oct. 17, 2017. (Gee gave birth to Ari.)

Robinson announced on Instagram in August that the couple were expecting a baby girl, writing on social media alongside a sweet family portrait, “I would like to thank my wife for giving us the girl.” 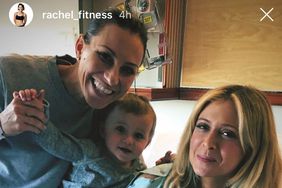 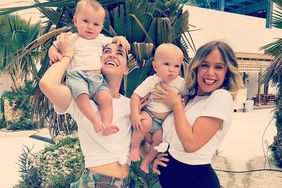