The princess, 31, and her American banker husband, Christopher O'Neill, welcomed a daughter at a New York City hospital, the family confirmed.

Princess Madeleine gave birth to the newest member of the Swedish royal family on Thursday night — on American soil. The princess, 31, and her American banker husband, Christopher O’Neill, welcomed a daughter at a New York City hospital, the family confirmed. “The Office of the Marshal of the Realm is delighted to announce that H.R.H. Princess Madeleine gave birth to a daughter on Feb. 20, 2014, at 10:41 p.m. local time New York,” the family said in a statement. “Both mother and child are in good health.” The baby girl’s name was not disclosed. Madeleine, the daughter of King Carl XVI Gustaf and Queen Silvia, married O’Neill in June in Stockholm. They announced the pregnancy in September. Madeleine is fourth in line to the Swedish throne, after her sister, Crown Princess Victoria; her niece, Princess Estelle; and her brother, Prince Carl Philip. — Tim Nudd 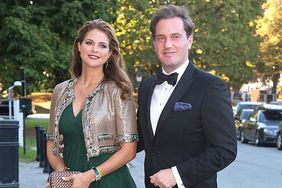 It's a Girl for Princess Madeleine of Sweden