Kylie Jenner rang in the spookiest day of the year with her growing family by her side.

Early Monday morning, the 24-year-old beauty mogul, who is expecting her second child with Travis Scott, shared a carousel of photos of herself, the rapper and their daughter Stormi celebrating Halloween.

In the first shot, Jenner opted for a low-key Halloween ensemble — compared to those of years past — wearing a black leather trench coat teamed with cat ears and combat boots. Alongside the reality star stood a Michael Myers mask-wearing Scott, 29, who held a mermaid-dressed Stormi in his arms.

In the next photo, Scott and the pair's 3-year-old daughter are seen sitting together in a golf cart.

In a third photo, Stormi is captured mid-jump, having fun in a bounce castle as Jenner shows off her baby bump in a catsuit alongside mom Kris Jenner in a follow-up shot. In the final pic, Jenner is photographed wrapping Stormi in a warm hug.

"in full mommy mode this halloween 🐈‍⬛," Jenner wrote alongside the post. "i hope everyone has a safe night 🖤🖤."

Jenner first announced her exciting pregnancy news back in September.

"Kylie is showing and was ready to share. She is beyond excited. She never planned to keep her pregnancy secret like she did with Stormi," a source previously told PEOPLE shortly after Jenner confirmed her second pregnancy. "She just wanted to wait until it felt right."

Late last month, a source also told PEOPLE that the Kylie Cosmetics founder is "doing really well" and is "so excited about the baby."

According to the source, Jenner is "having fun decorating a nursery and getting ready for the baby," as well as planning a baby shower for December.

"She and Travis are doing great too," added the source. "They spend as much time with Stormi as they can. Kylie is convinced that she will be the best big sister." 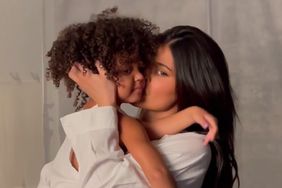 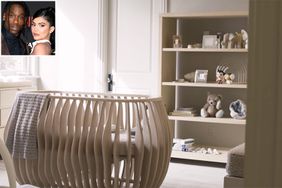