These stars have no qualms about hitting the gym during pregnancy

The star was pictured getting her prenatal sweat on in a snap posted to her Instagram, where she showed off her baby bump in an all-black ensemble while pointing at the Hollywood Sign. "Monday Morning hike! Gettin' it in! #HappyMonday," the Desperate Housewives alum captioned the moment.

The expectant supermodel is all about multi-tasking, wearing a facial mask while practicing her Pilates moves.

In a blog post on her personal website the Dancing with the Stars pro revealed she's maintaining her physical activity by frequenting her Beverly Hills dance fitness studio with a take-it-easy approach.

"Staying fit can be very tricky when you're pregnant. You're exhausted all the time so motivating yourself to work out can be difficult," Johnson Herjavec admitted.

A few days after she slammed critics of her workouts during pregnancy, the expectant Keeping Up with the Kardashians star shared her exercise routine on Snapchat while inside of her home gym where she did workouts for her abs and lunges with bands.

The once-expectant mom, who's married to comedian Kevin Hart, is still found time and energy to hit the gym. "#36weeksAndCounting Zo loves it! he be in there just kicking away. lol," the mother-to-be captioned the footage, along with a shout-out to her baby, who the couple plans to name Kenzo.

The Honest Company founder, who recently welcomed son Hayes, was a mama-to-be on the move, as evidenced on her Instagram story. Among the moves Alba, already a mother-of-two, performed during her sweat session? Push-ups, kettlebell lifts, resistance-band exercises and time on a stepper machine.

Would you ever doubt the tennis champ's abilities? She already proved she was a supermom before welcoming daughter Alexis, as we learned during her interview with The Telegraph, in which she got candid about how she prioritized fitness. "I intend to keep exercising for as long as possible while pregnant," said Williams. "I want the baby to be healthy and for that you need a healthy life."

The Hills alumna did not mess around when working on her fitness while eight months pregnant. Through step-ups, dips and presses, Montag maintained her cool, captioning one shot: "Look how I'm doing."

The actress, who recently welcomed daughter Bodhi with husband Ian Somerhalder, kept up quite a workout routine while pregnant. "I do yoga. I lift weights. I do workout videos when I can't do outdoorsy things," she told Fit Pregnancy and Baby, adding that she would take a 30-minute walk every day in addition to her regular exercise routine. "And I just got water weights, so I can work out in the pool. I've always been an active person. It's what makes me feel good. As long as the baby's fine, I'll keep it up."

Back when the yoga instructor was expecting her first child with husband Alec Baldwin in 2013, she opened up about the role exercise played in her day-to-day. "My entire life has been about being in shape," she revealed in an interview, adding that her workout routine included hour-long sessions at barre studio Physique 57 seven days a week. "I just feel much better when I exercise," she explained. "If I can't get to a class, I'll walk around the city or go for a light jog."

While pregnant with daughter Luna, the model continued working out, opting for daily exercises with Body by Simone creator Simone De La Rue. Teigen's typical workouts included arm work and leg exercises (since ab exercises are off-limits after the first trimester). "You need to have strong arms because you’re going to be lifting the baby, so I use the resistance bands with her and we do bicep curls and tricep curls and some extensions," De La Rue told PEOPLE. "We use 3- and 5-lb. weights to do flies and overhead presses, really working on strengthening the shoulders and chest as well so that she’s ready to hold the baby."

"We worked out throughout her entire pregnancy," celebrity trainer Harley Pasternak shared with PEOPLE about the actress, who welcomed her first child, son Noah, in 2012. "She was a model of health through the whole process." He added: "She really educated herself big time and had a great relationship with her physician so she really understood the safe boundaries of how to exercise and eat well during pregnancy. As a result, she knew how active she could be and she was very consistent and didn't overdo it." Pasternak also revealed that with every trimester, workout moves would be modified.

Jane the Virgin star Justin Baldoni's wife is no stranger to getting her workout on during pregnancy. In an Instagram post, the actress shared that she walked five miles a day while expecting her first child, Maiya, and she's picking that up again during her second pregnancy. "I've been told that Yogi Bhajan (who introduced Kundalini Yoga to the US) said that if a woman walks five miles a day during her pregnancy her baby will come out like running water," she began. "Well, if running water takes 35 hours to travel the length of a birth canal then Maiya definitely came out like running water. But I'm still so happy I was adamant about my walking back then because while it may not have helped much with the length of the birth I'm convinced it helped with many other things. So here we go again, daily dates with the treadmill." 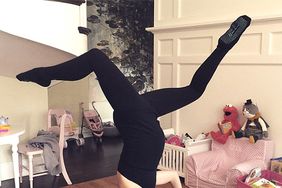 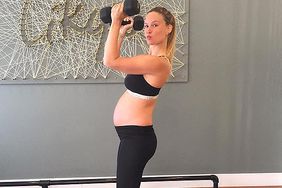 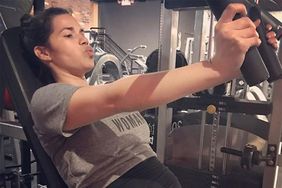 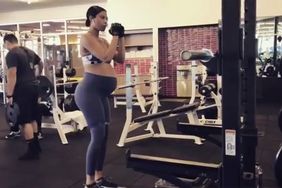 Harley Pasternak: The Dos and Don'ts of Your Pregnancy Workout 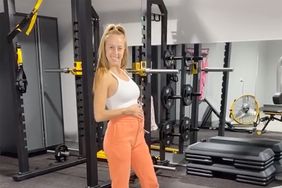 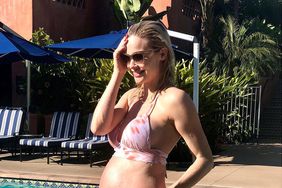 From Sightseeing in Tokyo to a Spa Day in Sante Fe: How Pregnant Celebs Are Spending Their Babymoons 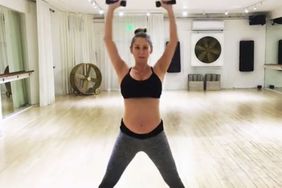 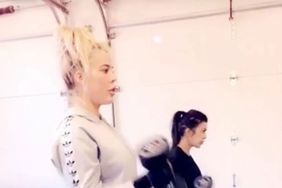 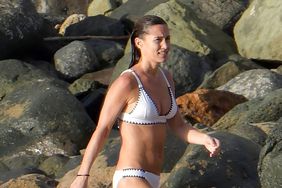 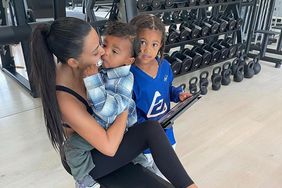 17 Celeb Parents Who Proved Kids Are the Best Workout Buddies