According to TMZ, Angelina Jolie and Brad Pitt‘s adoption of son Pax Thien was made official yesterday after a judge approved it in Los Angeles County Children’s Court in Monterey Park, CA. The adoption was first approved in Vietnam, and then had to be approved by a judge here in the United States.

Angelina’s representative told TMZ that the celebration started at the courthouse with a teddy bear for Pax.

How did you celebrate your child’s adoption becoming official? 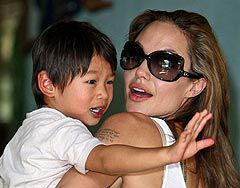