With a philosophy of ‘when the toy does less, the child does more,’ Parents Magazine recently released a variety of new toys for kids aged 12-months to 4-years. Just in time for the holidays, there really is a little something for everyone! Our sons Owen (3 1/2) and Sam (1-year) tested five of the toys — the Under Lock and Key Garage, the Kitty Keyboard, the Letter Tiles Puzzle, the Fruit & Vegetables A-Z Wooden Puzzle and the MyPod MP3: Children’s Songs Music Player — over a period of one week, and overall we would have to give the entire product line a big thumb’s up.

Sammy wasted no time getting to work on the Under Lock and Key Garage: He’s never met a car he didn’t like. But he really enjoyed these cars, as they are lightweight (easier for him to push along the floor), colorful and totally bite-able, which is his main prerequisite at this point in time. The cute three-car garage stores the cars behind a color-coded door; The child finds the color and shape-matching key that will open the correct door, and push a button to propel the cars out of their respective garage.

The whole ‘put-key-in-lock, turn-key, lock-up-the-cars, unlock-the-cars’ concept is definitely over his head, but then again, this toy is suggested for an 18-month-old and he’s barely one. That said, Owen was very much into the locking aspect of the toy so it was a great toy for them to play with together. As anyone with two (or more!) kids knows, finding toys that appeal to different age-ranges is always a big, big bonus — We’d recommend it for this reason alone. Also, the fold-away tote-along handle makes transporting the garage super easy. The Under Lock and Key Garage has a suggested retail price of $19.99, and is available for that price at Target.

The Kitty Keyboard was a big hit with Owen. It looks great — definitely a visually appealing toy and it caught the attention of both boys immediately. The keyboard (which appears in the kitty’s grin) features two full octaves of keys that can be played in one of four different instrument sounds, or by pressing the ‘meow’ button, which plays every note in a different ‘meow’ sound. To accompany their own musical creations, tots have the option of several automatic beat buttons, including rock, blues, samba, techno and disco. The keyboard also has a record and play-back feature and a microphone for sing-a-longs, although the play-back button only records music that is played on the keyboard and not what is being sung. Finally, the toy offers two prerecorded melody buttons; The first features seven cat-friendly renditions of popular children’s songs, while the other offers 20 prerecorded melodies of classics like ‘Twinkle, Twinkle’ and ‘All Around the Mulberry Bush.’

If you have a budding entertainer, this toy is great. Because there are so many different musical possibilities depending on the selections made, however, it can be a little annoying (imagine techno music blasting while a cat ‘meows’ ‘Mary Had A Little Lamb’). But if the goal is to have an entertained toddler — as is the case for most of us — the Kitty Keyboard won’t disappoint. (Suggested retail price: $30; Available for $28.99 at Target)

Owen immediately took a liking to the Letter Tiles Puzzle. He loves to do anything that involves letters and he’s really excited by the early, early stages of spelling. If you’ve got a child who constantly wonders what words begin with what letter, this toy is for you. It’s fairly straightforward: 26 magnetic letter tiles and 4 magnetic design tiles all have a designated spot on the puzzle board…you just match up the tile with its correct location. Each letter tile has a corresponding image (A for Apple, W, for Wagon, etc. etc.). On the back is a chalkboard. Honestly, it seems so basic that I thought for sure he’d tire of it quickly, but one week later, he’s still playing with it pretty regularly. As an added bonus, because the puzzle is magnetized, when it’s time for clean-up the pieces stick to the board so you don’t have to worry about losing them or spilling them, and they’re also use-able on other metal surfaces like the refrigerator. It’s a nice, no-fuss toy that is sure to please a preschooler. (Suggested Retail Price: $15; Available for $12.99 at Amazon.com).

The Fruit & Vegetables A-Z Wooden Puzzle got off to a slow start with Owen, probably because he’s generally adverse to wooden puzzles where the pieces don’
t have clearly defined spots. That said, after three days of showing absolutely no interest in the puzzle, he finally gave it a shot, and he loves it. It also has an alphabet hook, which we love, and I very much appreciate the interest it generates with regard to the whole concept of fruits and veggies (of which Owen is also traditionally adverse!) He loved learning about new foods like quince and durian, and how often can you say that about a picky toddler? (Suggested Retail Price: $15; Available for $12.99 at Amazon.com).

Danielle adds: Anya has this puzzle too and loves it. I thought she’d be too young for a puzzle without clearly designed spots (like Missy mentioned) but she’s quickly gotten the hang of it. Also, she’s learned vegetable and fruit names that she’s never tasted before and is saying the names of those she’s never said before.

Last, but certainly not least, is the MyPod MP3: Children’s Songs Music Player. Sam is very much into nursery songs and buttons, so this toy is a winning combination from his (and our) perspective for sure. The MP3 player features 14 familiar songs including ‘I’m A Little Teapot,’ ‘Baa Baa Black Sheep,’ ‘Mary Had A Little Lamb’ and ‘Rain, Rain Go Away.’ There is a volume control switch and kids can even change their background wallpaper by turning a knob at the top of the toy. Sam figured out how to scroll through the songs pretty much instantly, and the scroll and stop buttons are relatively large and easy to operate. The toy is small, only 4 1/2-inches by 2 3/4-inches, which makes it perfect for stashing in the diaper bag when you’re out and about and need a quick and easy distraction. The sound quality is great and the songs are not obnoxious. Of all the musical toys we own, this is definitely the easiest to live with! Because of its portability, its ease of use and its wide-ranging appeal — Owen sings along too! — this would have to rank as our favorite toy we reviewed. It would make a great stocking stuffer! (Suggested Retail Price: $17.99; Currently $12.99 at Target, in-store only) 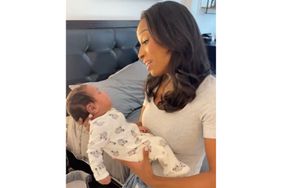 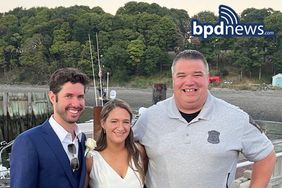 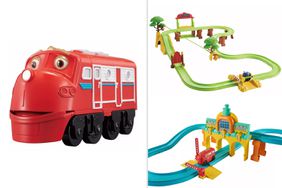 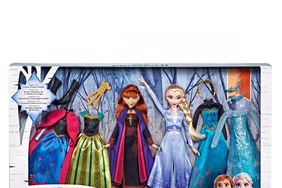 The 13 Coolest Gifts for the Ultimate 'Frozen 2' Fan