The mom-to-be took to Instagram on Sunday to wish Hollywood’s biggest stars well at the Oscars, moments before many began arriving for the red carpet.

“Favorite Oscar day ever. Good luck to everyone at the show!” Hathaway, 33, captioned the photo of her growing bump alongside her own Oscar from her 2013 win for Best Supporting Actress for Les Misérables.

Despite expecting her first child with husband Adam Shulman, Hathaway hasn’t let her pregnancy slow her down — she even stepped out in a flowing red dress for a pre-Oscar party Saturday at the Giorgio Armani boutique in Beverly Hills.

This isn’t the first time Hathaway has shown off her bump on Instagram. In January, she took to the social media site to officially confirm her pregnancy while posing on a beach in a red bikini.

“So, posting a bikini pic is a little out of character for me, but just now while I was at the beach I noticed I was being photographed,” she wrote alongside the picture.

“I figure if this kind of photo is going to be out in the world it should be an image that makes me happy (and one that was taken with my consent. And with a filter :)” 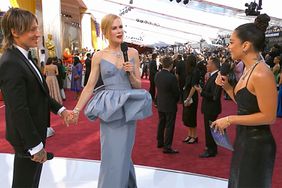