Olivia Wilde Dons Red Gown to Honor Martin Scorsese: 'I Successfully Did Not Give Birth on Stage'

Olivia Wilde was ready to pop — in red!

The actress, 32, who is expecting her second child with longtime fiancé Jason Sudeikis, turned heads in an ankle-length red Valentino gown at the Friars Club in New York City on Wednesday. Wilde was there to honor Martin Scorsese, whom she worked with in the HBO TV series Vinyl, as he received the club’s Icon Award.

Wilde and Sudeikis, 41, share 2-year-old son Otis Alexander, but their only child is about to become a big brother. On Thursday, Wilde took to Instagram to share Wednesday night’s close call.

“Last night, I got to honor the great Martin Scorsese, as he received the Friars Club Icon Award,” she wrote in the post. “I successfully did not give birth on stage, AND got to meet Ellen Burstyn. Quite a night.”

In April, Wilde talked about how excited she was to expand her family.

“I’m desperate for more [kids]!” she said, before announcing her pregnancy via Instagram later that month. “I love my siblings so much and Jason has incredible siblings, too. The more the merrier.”

Meanwhile, baby Otis has been preparing for the new addition as well.

“[He] loves little babies,” Wilde said. “He has a Michael Jordan doll that he carries around sometimes. [He uses the doll] as either a hammer or a baby.” 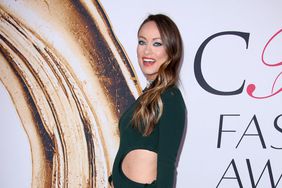 Olivia Wilde Reveals She's Pregnant with a Girl While Supporting Hillary Clinton: 'This Hits Me Deep in My Core'

How Do You Like Your Eggs? Olivia Wilde Shares a Picture of Her Growing Baby Belly