"At the end of the day, it's a celebration and not just a thing you attend for the sake of attending," Artem Chigvintsev says of their upcoming nuptials

Whatever his parents' upcoming wedding ends up looking like amid the ongoing coronavirus pandemic, it's certain baby Matteo Artemovich will have an important role.

On Wednesday's episode of The Bellas Podcast, Nikki Bella and her fiancé Artem Chigvintsev answered a fan who asked about the plans for their nuptials, insisting that their 1-month-old son would play a big part.

"Like maybe being able to walk down the aisle," Nikki, 36, told her fiancé — to which he noted in response, "Well, walking down the aisle means it's gonna take a while."

"I don't know. How he is, he might be walking [sooner]," countered the Total Bellas star. "[Twin sister Brie Bella] and I walked at 9 months. ... He's crazy, freakishly strong."

Regardless of whether Matteo will walk or be carried, his parents want to make sure that by the time their wedding plays out, people will be able to have a good time without worrying about the global health crisis.

"We're looking forward to [the wedding]. We just want to make sure that it's not going to be plastic walls everywhere around every single person," said Chigvintsev.

And "at the end of the day," continued the new dad, "it's a celebration and not just a thing you attend for the sake of attending. And both of us feel the same way about that. Once we can figure it out, what that would look like, I think it's going to start moving quickly."

RELATED VIDEO: Nikki Bella on Being a New Mom: "I Never Knew I Could Be This Happy and This in Love"

Nikki and Chigvintsev got engaged during a trip to France in November 2019, two years after starring together on Dancing with the Stars, where they were eliminated about halfway through the competition.

Then in January, Nikki and Brie (already mom to 3-year-old daughter Birdie Joe) revealed to PEOPLE exclusively that they were both pregnant — with due dates less than two weeks apart. Nikki welcomed Matteo on July 31, while Brie gave birth to son Buddy Dessert just one day later, on Aug. 1.

"It made me so emotional," Nikki told PEOPLE last month of seeing Chigvintsev hold their son for the first time. "It's crazy because I'm already in love with this person. I've created a life with them and we're engaged."

She added, "But in that moment I had fallen so much more in love with him because to see him be so emotional holding his son, and I could just see this caretaker form, like this man that's going to protect this little boy for the rest of his life. Just seeing the emotion in his face, it made me melt." 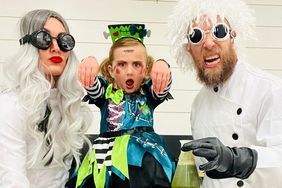