The Nine Perfect Strangers star, 54, appears on the cover of Marie Claire Australia's 25th anniversary issue, opening up about her career and desire to have more children.

"I wish I'd had more children, but I wasn't given that choice," Kidman tells the magazine.

"I would've loved 10 kids," Kidman tells Marie Claire Australia. "But that's okay because I get to mother other children. I have six nieces and nephews and I'm godmother to 12. I love mothering, I love kids: They're quirky, funny and unfiltered. And then you get to see them grow and send them on their way."

While married to Cruise between 1990 and 2001, Kidman suffered an ectopic pregnancy and a miscarriage while in her 20s and was subsequently told it would be unlikely for her to conceive.

The Oscar winner opened up about those losses in a 2018 Tatler interview.

"I know the yearning. That yearning. It's a huge, aching yearning," she described of wanting to have kids. "And the loss! The loss of a miscarriage is not talked about enough. That's massive grief to certain women. There's an enormous amount of pain and an enormous amount of joy on the other side of it. The flip side of going through so much yearning and pain to get there is the feeling of 'Ahhhh!' when you have the child."

Kidman told Glamour U.K. in November that her sister Antonia and three of her kids moved in with Kidman's family while she shot the new Hulu series Nine Perfect Strangers in Australia.

"I just love kids. I said once, 'I prefer children to adults.' I like adults more now, not more than kids, though," she said at the time. "I love being around children and we've got five kids living with me now because Keith had to go back [to Nashville] to release his album. So, my sister moved in to help me while I'm filming, and we have three of her younger kids — she has six — living with us."

"It's just fun because I just find their perspective not so heavy," continued Kidman. "It puts you in a more childlike place where you go, 'I can move through this and it can be fleeting. It doesn't have to become a massive weight.' " 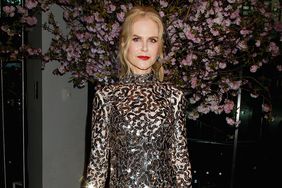