Update: Nicole Kidman‘s rep has confirmed that she and Keith Urban, both 40, are expecting a baby. Rumors grew louder today when the actress dropped out of a scheduled film role, but sources say Nicole wished to keep the pregnancy quiet due to prior miscarriages and an ectopic pregnancy. The publicist said,

Nicole Kidman and Keith Urban confirmed today that they are expecting ababy. The coupleare thrilled!

Nicole’s mother has told the Australian press that she ‘thinks it’s in July‘ in regards to the due date. When asked outside a restaurant about the pregnancy this evening, Nicole replied that she was ‘very excited…thrilled,’ but refused comment on the sex of the baby, citing it as ‘too personal.‘

UpdateDecember 29th: Her Australian rep has denied the rumor, saying,

Itis incorrect. She must have had about 30 babies by now. She’s inAustralia making a film and her family are in Australia. She’s happilyensconced away somewhere having a few days’ break. As far as we’reconcerned it’s another rumor out of London.

Originally posted 10:30 am: The Daily Mail is reporting this morning that Nicole Kidman is pregnant. She and husband Keith Urbanreportedly shared the happy news with family and friends over theChristmas holiday. Nicole and Keith, both 40, were married in June2006; Nicole is already mom to 14-year-old Isabella and 12-year-old Connor from her previous marriage to actor Tom Cruise.

A rep refused to confirm or deny, saying that both her and Nicole are on vacation at the moment. 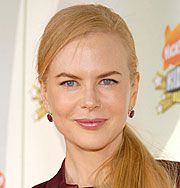