Neal McDonough, who played Edie’s crazy husband Dave Williams on Desperate Housewives, and his wife, Ruvé, have a new addition to their family.

Daughter London Jane McDonough was born on the morning of Monday, Jan. 11 at the Good Samaritan Hospital in Los Angeles, PEOPLE confirms. She weighed 7.95 lbs and measured 19 inches long.

“Morgan Patrick, 4, and Catherine Maggie, who is 2 ½, are thrilled to have a new baby sister in the house,” Ruvé tells PEOPLE exclusively. “The first words out of their mouths when they wake up or come home from preschool are, ‘Where’s Baby London?’ ”

London has achieved top status in the family. “She is being treated like the president in the McDonough home,” the new mom jokes. “She sleeps for four hours and breastfeeds a lot. There’s hardly much time for ‘play’ right now, but she’s smothered in hugs and kisses from the kids every chance that they get. We’re definitely going to keep her!”

As for how Neal is doing, Ruvé says he’s “truly been Superdaddy. The kids even call him that. He has been a super help during Mom’s recovery. We’re already thinking about number four!” 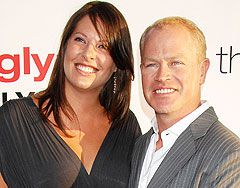 It's A Girl For 'Desperate Housewives' ' Neal McDonough

Neal McDonough: Why I Lose My Pants in Public!