“Ashby is obsessed with Ariel! I like her being a bit of a tomboy, but she is totally into all the Disney princesses,” O’Dell tells PEOPLE Moms & Babies.

“She loves Ariel — I think it may be because Ashby loves to swim so much herself.”

The party was truly all about Ariel, O’Dell laughs. “There were Ariel decorations everywhere in pink, purple and aqua, an Ariel jumpy, an Ariel piñata and balloons. We had a character Ariel show up at the party in her mermaid outfit and play games with the kids — limbo and hot potato — do magic tricks, make balloon animals and even facepaint the little ones!”

Ashby’s birthday cake was Little Mermaid-inspired as well. “This was mama Nancy’s favorite Ariel thing,” O’Dell confesses of the design by Big Sugar Bakeshop. “The cake turned out so beautiful. There was artwork of Ariel and her buddies, Sebastian and Flounder, as well as brown sugar serving as sand, jelly beans as rocks, frosting coral reefs and seaweed.”

Guests left with party favors from Mabel’s Labels — Camp Packs with princess icons for girls and dinosaurs for boys — a selection of items from Ju-Ju-Be.

Ashby indulges in one of her hobbies — photography! — while taking some snaps of Mom. “We’ve decided Ashby is either going to be a veterinarian or a photographer because she loves animals and taking photos. Maybe she’ll be a wildlife photographer,” says O’Dell.

“I’ve made an entire scrapbook of all the pictures Ashby has shot. She’s actually really good at taking photos — considering she’s only three — and it’s so cool to see what she [chooses to] photograph because that’s what she’s interested in. I love seeing them from her angle and perspective.”

“Ashby’s into puppies, princesses, photography and boys, boys, boys! We can’t get over how obsessed she is already! My husband and I are in trouble,” laughs O’Dell. “She has major crushes on my stepson’s twin friends who are 14 years old. I asked Ashby if her boyfriend was coming to see her and she replied, ‘I don’t have a boyfriend. I have two boyfriends! And they match!’ Oh my! She definitely prefers the older ones.”

Luckily Ashby seems to have set her sights on someone closer to her own age as well. “Axel, the blond next to her in the birthday pictures, is one little boy her own age — thank goodness! — that she seems to love. His mom and I have decided that they’re meant to be. Ashby and Axel — just sounds too cute!”

As for what O’Dell herself has been up to since leaving her longtime hosting gig at Access Hollywood, the answer is a lot.

“I don’t know how it happened that I chose to leave a five day a week job and I am busier than I was working every day of the week,” she laughs. “Since I left Access, I’ve been so busy hosting TV specials — I did the Critics Choice Awards Live Arrivals and the NFL Superbowl concert — starting a furniture line, a jewelry line — the Nancy O’Dell Collection for QVC — became the spokesperson for Rusk Professional hair care … plus, I have a scrapbooking line with Creative Memories coming out in October! I am running all over the place!”

O’Dell has also been in “meetings galore” about her next TV project, which she hopes to share news about soon. In addition, she continues her work with the MDA and the foundation they started together, Betty’s Battle, which honors her mother, who passed away from ALS in 2008. “Hopefully, we will be able to find a cure in the near future so that other families don’t have to go through what my family did,” adds O’Dell. 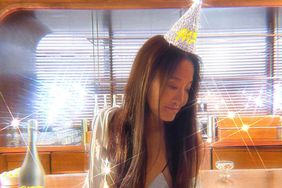 Nancy O'Dell Hopes to Set An Example For Ashby

Nancy O'Dell on her social butterfly 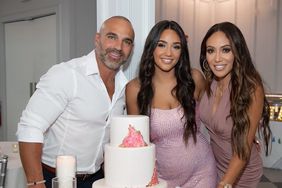