Mila Kunis Jokes Second Pregnancy Is 'Completely Different': I 'Have No Idea' How Far Along I Am

"I can tell you when I'm due and then do the math backwards," the actress admits about how different her second pregnancy is from her first

Mila Kunis is nothing if not honest about the ups and downs of parenthood.

The 32-year-old actress stopped by Live with Kelly Wednesday to promote her new comedy Bad Moms while, ironically, dropping some wisdom on what it’s like to be an actual mom to a toddler while expecting baby number two.

“The other day, someone asked me how far along I was and I was like, ‘I have no idea,’ ” said Kunis, who is already mom to 21-month-old daughter Wyatt Isabelle with husband Ashton Kutcher. “I was like, I can tell you when I’m due, and then I can do the math backwards.”

Admittedly, the Family Guy actress hasn’t been quite as on the ball with tracking her second child‘s every growth spurt.

“With [my first pregnancy], I could tell you precisely what she was developing, and what stage it was … but [with] the second one, I’m running after a toddler or I’m working, so I’m like, ‘Oh that’s right, I’m pregnant,’ ” she says.

As far as pregnancy food preferences and dislikes go, Kunis has definitely experienced her fair share this time around. Namely, she “can eat eggs all day long,” but there’s one thing she can’t handle.

“I can’t eat meat. It’ll look delicious to me, and I’ll take a bite of it and I’ll be like, ‘Uh-uh. Can’t do it,’ ” she says, adding that ground meat, like a burger, is completely fine while a whole piece of meat like a steak isn’t.

The That ’70s Show alum also shares that she has only done this film between babies one and two, and that since she’s gone filming for long hours, the projects she takes on have to be really worth it. “[This is] the first time that I’ve ever left my daughter for three days. It’s rough.”

But Kunis isn’t completely removed from Wyatt’s everyday activities, even though the latter is a little confused about what’s going on when her mom isn’t in the same room.

“I have a thing called Nest Cam in my family room, so I totally spy on my kid eating breakfast,” the soon-to-be mom of two admits. “And then I talk to her and she thinks Mommy lives in a camera, which is frightening and horrible anyway. But it’s rough. It’s hard being away from your kid.”

During a Wednesday appearance on the Today show, Kunis also gets real about the pressure to balance her work and home life. But surprisingly, there’s only one person she’s really feeling it from.

“[When] I got pregnant with Wyatt, I put so much pressure on myself to think about how I’m going to balance work and life. And I realize it’s impossible. And I think it literally ate me alive,” she confesses. “No one put the pressure on me — I just did it fully to myself.”

WATCH: Mila Kunis Opens Up About When She Realized There Was Something More with Ashton Kutcher!

Fortunately, Kunis said Kutcher has been a completely hands-on father — from the start.

“He’s an incredible father — there’s not even a question. Some men, and it’s okay, they take a little bit of time to adapt to having a baby and feel comfortable,” she explained. “Wyatt came out and two seconds later he had it down. He was swaddling and changing diapers.”

Loving Mom-to-Be Mila Kunis' Recent Style? The (Non-Maternity!) Looks Will Work for You - Pregnant or Not 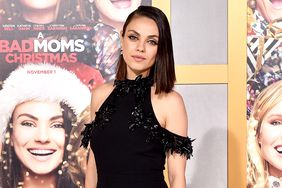