Mickey Guyton Slams User for Calling Her Son the 'Ugliest' as Stars Rally Around: 'Shame on You'

"The truth is these are the types of messages we see and get all the time," Jimmie Allen, a fellow Black country star, commented on her post

On Thursday night, the country singer, 38, shared a screenshot of a hateful, racist message from a social media user calling her 4-month-old son Grayson "the ugliest child I've ever seen," as Guyton directly called the user out and fellow stars rallied around her.

"This deserves front and center attention," she wrote on Instagram. "@crystal502021 came for my child. Shame on you."

"Don't be like Crystal," she added on Twitter about the message describing her as "trash" and telling her to "go back to the projects."

Later, while sharing PEOPLE's story, she wrote, "Enough is enough. Say what you want about me but don't come for my 4 month old innocent child. I am beyond tired."

Among those rallying around the star were the likes of Jimmie Allen, JoJo and LeAnn Rimes.

"I mean, I can't with this kind of bs… who has the time for this!?" Rimes wrote. "This is not a reflection of you. I know you know that, I'm just reiterating. I'm so sorry. Your little man is ADORABLE and you are welcome and wanted WHEREVER YOU DAMN WELL CHOOSE TO BE! I LovE you."

"The truth is these are the types of messages we see and get all the time," added Allen. "Good thing is you know who you are sis and your worth. These lost hearts can't take your smile. Love you. 🖤"

"Despicable. Having the caucasity to come after your child but being cowardly enough to have her page private," commented Cassadee Pope. "I would say she can dish it and can't take it, but I know none of us would ever stoop as low as she did. We love you."

Reposting on her Instagram Story, JoJo wrote, "FURIOUS. I know I'm one of MANY including @keisharenee who are REPORTING THIS ACCOUNT. Love u @mickeyguyton."

"So despicable," wrote Morgane Stapleton, wife of Chris Stapleton. "Keep that pretty head of yours held high. You and your precious family are loved by so many."

Guyton — who welcomed her baby Grayson in February — has been open about the struggles she's faced while being a Black artist in country music and that she understands her child will face similar struggles.

"I've seen racial injustice happen to my husband. I've had a 'Karen' falsely make claims against him and say some of the most heinous things, like the N-word. I'm growing this Black child in my belly that is going to have to face this," she told PEOPLE when she was pregnant. "I pray for him."

RELATED VIDEO: Grammy Nominee Mickey Guyton Says 'Country Radio Has Not Been Supportive' of Song Black Like Me

The singer released her track "Black Like Me" in the wake of the murder of George Floyd last year and told PEOPLE in October she'll be "fighting more than ever" for racial equity.

"Now that people are listening, I'm telling you: Not only is there discrimination happening to Black people, there's discrimination happening to white women within this country music industry that we need to address," said Guyton, referring to data that reveal that female artists accounted for only 10 percent of radio airplay in 2019. "It's so important to bring diversity and inclusion."

"I've been beaten down pretty bad, but I'm not scared anymore," she added. "If people are upset with what I have to say, I'm doing something right." 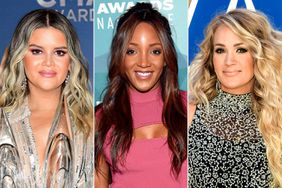